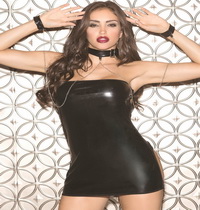 When it comes to getting their hard drive rebooted, robot enthusiasts do it like a sex machine, literally. Also known as ASFR, these individuals are always having a droidian slip, especially when it comes to come-hither humanoids or non-humanoid robots. According to sexperts, robot fetishism is an extension of agalmatophilia, which is described as sexual arousal from inanimate objects such as statues, dolls, and mannequins. This type of technosexuality is a fantasy-based fetish and serves as the premise of the film Her with Joaquin Phoenix. Hey baby, can you flash your software?

For some individuals, sinning in front of religious symbols is what gets them all aflutter. Motherhood is divine but sex is a sin, and breaking the rules makes it more fun and on the naughty side, the perfect ingredients for an ultra sexy fetish. Sexologists have found that people with hierophilia commonly have sex in front of church pews or a crucifix. Some also admit to breaking into churches at night for sacred but scandalous sex on the alter. Sexperts have also discovered that this fetish is more common in religious types and rare among atheists.

For some, itâ™s more than just garden-variety tree-hugging behaviors typical with hippies. People with dendrophilia get their trunk tickled from trees, particularly ones with interesting bumps and shapes. Literally meaning âlove of trees,â dendrophilia has played a large role in sex rituals of tribes from South Africa and the Amazon. According to Dr. Brenda Love, author of âEncyclopedia of Unusual Sex Practices,â trees were considered ancient symbols of fertility and often used in sexual ceremonies. Now considered a bizarre fetish among sexologists, it gives a whole new meaning to the term ânature lover.â™

These sexy eccentrics take saying âGod Bless You,â to a whole new level with mucopheilia, the fetish that makes people get aroused from sneezing or watching someone sneeze. Sexologists also point out that itâ™s not uncommon for people to derive pleasure from sneezing. In fact, according to urban legend, some claim to have sneezgasms after seven sneezes in a row. Gesundheit baby!

The term âfetishismâ™ was derived from the word âfetish,â™ which is used in anthropology to describe an object that is believed to have supernatural powers. Whether itâ™s some friendly toe sucking or edgy leather lingerie and whips, fetishes are meant to excite the senses and push the boundaries of sexual freedom and desire.